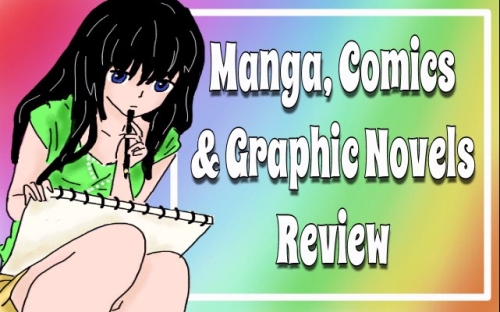 Oono Fumi is a poor second year high school student. Because of her father’s debts, she’s kicked out of her own home and has to rely on her own connections to survive. Thus begins her life as a live-in housekeeper for a reclusive writer…

For the past couple of months I’ve been in a Shoujo manga kick and even if I’ve enjoyed a few of them others have started to blend into themselves with hardly anything new — same tropish conflict, silly female characters.. So, when I find something like this one I squeal with joy…

This Manga to me is all about the characters, in fact they are the reason I couldn’t put it down and I’m Patiently — biting my nails kind of patience — waiting for the next instalment to come out… 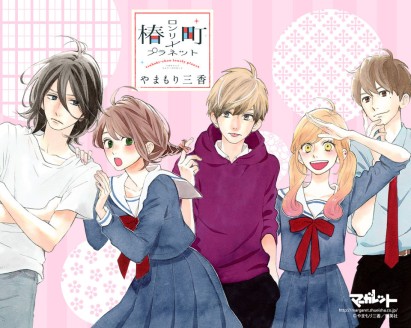 The plot seems quite simple, a 16 year-old girl who is down on her luck and ends up working with a 28 year-old writer to help support herself and pay her father’s debt. Of course a relationship starts to develop between them and even when this has some bits of common tropes it’s nothing over the top or dragged out.. I would say that it’s just the perfect balance to help the relationship grow.

Like I said before the characters are the best part of all this, Fumi (the girl) is so mature for her age, she has had to grow up a lot due to her circumstances but still manages to be so sweet, happy, helpful, loyal and optimistic in spite of everything. She’s so very real and likeable which is unusual for a female shoujo protagonist. 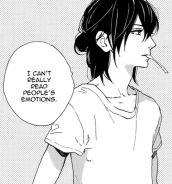 Akatsuki (the man) or Sensei as we come to know him is a bit rude, moody, pretty much an stereotypical writer, but there’s so much more to him than that, he’s passionate about his work, so very socially awkward and he knows it and tries to do something about it which not always ends up working out because he has trouble reading other people’s feelings and is honest and straightforward in what he thinks. I honestly adore his character, even when he’s being a bit of a jerk with Fumi just calling her Kid in the beginning.. 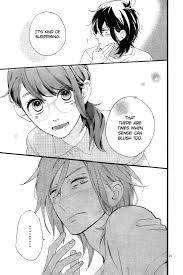 Both of them together are such a well balanced combination, you completely forget the age difference between them.. their relationship flows slowly and steadily with lots of humour and little sweet details that will literally give you all kinds of fluttery feelings… The story moves along at a nice pace without getting stuck on anything overly angsty. It’s more of an internal story and not so much about what goes on around them, and we get to see all the characters grow — not just the main couple but the side characters as well which are also great.

As for the Artwork I absolutely love it, the characters’ drawing are so spot on with their personalities… Fumi with her not quite young and not quite old style and Akatsuki with his slobbish attire.. their eyes are so detailed and expressive… I truly love this Author’s artistic style.

If you love slow burn romances not very complicated  but amazingly well put together story lines and are not bothered by significant age differences between couples then check this manga out.. you will not regret it… On a sidenote I would love to see an anime series about this manga… just to put it out there.

This was the Letter T for my A to Z Reading Challenge, making progress…yay!!

I'm Michelle I’ve been an avid reader for most of my life, I love getting lost in a new adventure whenever I pick up a book. Being able to experience so many different emotions, perspectives, struggles it’s an amazing treat. Also being able to discuss, gush and fangirl like crazy about my favorite reads with fellow readers, that's the reason behind my blog. So, I sincerely hope you enjoy your visit to my little bookish corner of the world. View all posts by chellesbookramblings

My Tweets
Michelle's ReaderRank
Michelle has reviewed 1649 books with an average rating of 3.547 out of 5.
302 people have found Michelle's written reviews to be helpful on Goodreads.
See more...